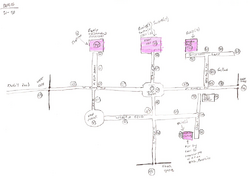 Map of the city by Derek Jeter

Behlos City is a city in the Kingdom of Evenhold that features in The Treachery of Zorag by Derek Jeter.

The city is situated many miles east-northeast of Evenhold, near the eastern end of the long, cobblestone-paved King's Road. It's surrounded by a high stone wall, with iron gates to the east and west through which the King's Road passes and a gate south that leads to Westwind Road. The town center is a wide paved area at the intersection of King's Road and the north/south Main Street, in the middle of which is a fountain and pool; other thoroughfares include Battleforge Lane, Cedar Lane, Dead Man's Pike, Elm Street, Wyvern Boulevard.

At the north end of Main Street stands the massive Great Hall where King Raulos holds court. Establishments in the city include Burly Irishman Outfitters, Kingsworth Clothing, the Black Horse Tavern, Trollsfire Pub, a large open market, and many others.

East of the city are the Gull's Eye Cliffs overlooking the Dreamless Sea, while south is mostly open country and farmland. North are the Shadow Mountains and the Dead Forest.