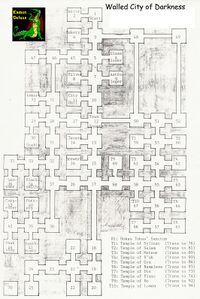 Map of the city by Frank Black

Lumen is a coastal city on the world of Eamon that is the setting for the adventure Walled City of Darkness by Tom Zuchowski. Lumen is also the name of its patron god.

Named thoroughfares include four major avenues (Northgate, Southgate, Eastgate, and Westgate) that connect the city's main entrances to the central square. Another major thoroughfare named the Avenue of Temples is lined with places of worship for many different gods; other streets include Ox Avenue, Wolf Street, Dog Alley, Rabbit Alley, Rat Alley, and Sheep Alley.