The adventurer Sam being resurrected.

Resurrect Character, also called Resurrect, Eamon Resurrect, or Char Rebirth, is an Eamon utility program created by NEUC president John Nelson that allows players to restore adventurers who fail to return from adventures. The program asks the user for the name of the adventurer to be resurrected; it then opens and reads the Characters file and, if it finds the requested adventurer, restores the record.

Nelson included Resurrect on his Eamon Utilities I disk, with a remark in the BASIC code dating it as 15 February 1984. Tom Zuchowski later added the program to the DOS 3.3 Eamon master distributed by the EAG, and included a slightly modified version of the program called Char Rebirth on his EAG Utilities Disk (with a note in the accompanying handbook that it's "handy when you've been killed out of an adventure"). 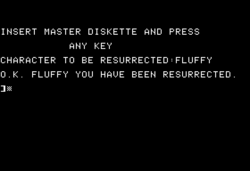