Scott Everts is the creator of Lightning Eamon, a compiled variant of Eamon developed around 1987 and published as part of his Shever Software venture. Everts subsequently adapted some of the Lightning Eamon functionality into his non-commercial Expanded Master.

In correspondence with Huw Williams in 2019, Everts recalls first encountering Eamon around 1980 when a high school friend let him borrow his Apple II+ for the weekend to play some computer games, including a few Eamon adventures. Everts, already a fan of role-playing games like Dungeons & Dragons and Traveller, was hooked and played the adventures all weekend. "Unfortunately we had Commodore PETs in school," he writes, "so I was only able to play it when I visited my friend."

Around 1983 Everts convinced his father to buy an Apple IIe, and through local computer clubs and other Apple users began acquiring more Eamon adventures. Everts ultimately found the National Eamon Users Club, becoming a subscribing member and acquiring nearly every published adventure. "Funny thing is," he writes, "they were based in Des Moines, Iowa and I was born in Ames, Iowa which is only about 45 minutes away. Sadly we never got to meet each other even though I used to spend summers in Ames."

In the mid-1980s Everts began a solo business venture known as Shever Software based in Placentia, California. The first software he planned to sell was a character generator program for the original Traveller role-playing game, a project he'd started years earlier on the Commodore PET and continued rewriting and refining for the Apple II. "I bought a pile of disks, made a brief instruction manual and title card. Borrowed a shrinkwrap machine and hand-assembled a few dozen copies. I bought an ad in Space Gamer magazine. I checked my PO box almost every day for months. Not one order ever arrived." Everts then tried selling at a local board game and RPG convention, but after again failing to make any sales he decided to sell his stock at a big discount to a local distributor. "No idea if that product ever made it to any other stores," he writes. "I've never seen any." 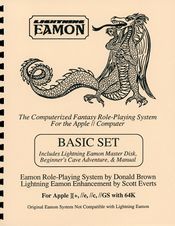 Everts decided he needed a new project. "I remembered my love of Eamon and I was enjoying programming so I thought about doing an advanced version. A software utility company called Beagle Bros made an Applesoft compiler. One issue with running Eamon on an original Apple II was it was a bit slow, so I thought it would be a great idea to rewrite it to easily support hard drives and use their Beagle Compiler to make it 'lightning' fast. It was a lot of work with extending the Main Hall and getting everything to work under the compiler." Everts completed a Lightning Eamon "Basic Set" package consisting of the Main Hall and Beginners Cave and converted four other adventures to work with the system. Instead of advertising it, Everts recalls that he went to the same distributor he'd sold to previously and they agreed to buy about a dozen copies of the Basic Set and converted adventures.

After Lightning Eamon, Everts gave up on Shever Software to focus on college, and because things like the Apple IIgs and accelerator cards made it less important to work on speeding up the game. To avoid having his work on Lightning Eamon be lost, he adapted the master to be compatible with the base Eamon system and released it for free as the Expanded Master. "I probably uploaded it to some BBSs," he recalls, "so it might be floating around. I’d love to know if it exists somewhere since I don’t have a copy of that one."

Everts graduated from Cal State Fullerton in 1991 with a degree in radio/TV/film and briefly worked in Hollywood, as a production intern on the MacGyver TV series and doing production assistant work on a few low-budget movies. "I found out that it wasn't quite as glamorous as I thought," he writes, so he sought different work. Some of Everts' friends and fellow D&D players were employed at Interplay Productions and told him the company was looking for QA people to test their games, so he joined Interplay and worked with them for 13 years on a wide variety of projects including Fallout, Fallout 2, Star Trek 25th Anniversary, Star Trek: Judgment Rites, Planescape: Torment, Icewind Dale, and Icewind Dale II.

In the early 2000s Everts left the struggling Interplay and accepted an offer from Obsidian Entertainment to work on Star Wars Knights of the Old Republic II. "Left after that project to get some much needed time off," he writes, "and eventually returned to work on Neverwinter Nights 2. Been there ever since."

As of mid-2019 Everts was working on Obsidian's The Outer Worlds, released in late October.