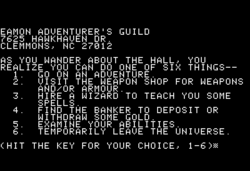 Eamon Master 1, often simply called the Eamon Master, is a master that serves as the standard for the Eamon series. It was created by Donald Brown around 1979 and saw minor modifications over the next few years to include some new features and standardizations. Most other Eamon masters are based largely on Eamon Master 1.

John Nelson writing in the August 1985 issue of the Eamon Adventurer's Log identifies the following versions of Brown's Eamon master:

This was Brown's first version and was not widely distributed outside the Des Moines area. By the mid-'80s the version was no longer being distributed, having been superseded by improved masters. Nelson calls this first version a "collector's item".

Nelson describes this version as the most widely used as of 1985. It adds SNAPPY, a file that gives the Burly Irishman a range of snappy comebacks, and features the ability for weak adventurers to "commit suicide" in order to regenerate their attributes. It also has the original non-standard text files for the first adventure, The Beginners Cave. Version 1.1 was no longer being distributed by the club by the mid-1980s.

This version is the earliest that the club was distributing at the time of Nelson's 1985 article. It has the same features as version 1.1 but its text files are standardized. (Players can list The Beginners Cave using the standard dungeon list programs).