Not to be confused with Eamon Utility Master or EAG Utilities Disk. 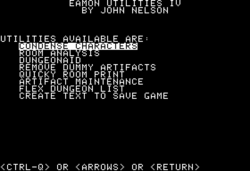 In his "Utility Lines" column in the August 1985 newsletter, Nelson explains how the series came to be:

The Eamon Utilities were written to provide extended control over the Eamon system. The original Eamon Utility programs were used aid in designing and playing Eamon adventures. After the utilities grew into multiple diskettes, it became apparent that they should be organized and divided into logical groupings.

Nelson explains that the four diskettes relate to four general kinds of activity: playing the game (I), designing adventures (II), "just fooling around" (III), and customizing or modifying (IV). He elaborates:

Nelson revisited the subject in his August 1985 column, explaining that the utility programs were created as a need for them arose: "Most of them were written because either some information was wanted about adventures, or some corrections, enhancements or conversions were wanted. The first utility diskette was put out when, through the natural accumulation, a disk full of them built up. The second was created when the first was filled, etc."

Just like Eamon adventure disks, copies of the utilities disks entered the collections of other software distributors. Some like the Big Red Apple Club made minor modifications, including adding their name and contact information.

Nelson includes a copy of his Eamon Utilities Doc as a text file on each for four volume he assembled which outlines the purpose and contents of each disk. He notes that the disks group utilities into different categories according to their general purpose, but that there is considerable overlap among them.

Eamon Utilities I is a collection of programs that are of particular use to players, including Character Maintenance for editing adventurer records, Resurrect for restoring deceased adventurers, Adventure Only for bypassing the Main Hall, and a variety of others.

Eamon Utilities II is dedicated to utilities for adventure designers.

Eamon Utilities III, a disk Nelson describes as being for "fun little side games" but mostly dedicated to Battle Royale.

Eamon Utilities IV contains programs useful for those who want to customize the system.

Two additional disks in the Eamon Utilities series appear in the libraries of other software distributors including Aspen Software and the Big Red Apple Club. These likely were assembled without input or involvement from Nelson:

Shortly after the Eamon Adventurer's Guild formed in 1988, Tom Zuchowski condensed the four NEUC utility disks into a single volume, announcing its release in the December newsletter. Zuchowski writes that the disk "contains the best programs from the old Utilities set, deleting obsolete and duplicate stuff."