From Eamon Wiki
(Redirected from Guildhall)
Jump to navigation Jump to search
This article is about the fictional building. For the program on the Master Diskette, see Main Hall (program). 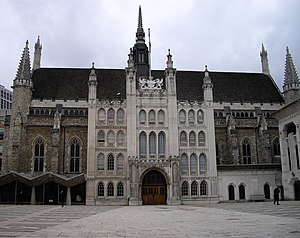 Exterior of the Great Hall of Guildhall, London.

The Main Hall program on the original Eamon Master Diskette describes the hall as a building with an outer chamber filled with boisterous adventurers where the Burly Irishman registers new guild members, and a much larger inner chamber where various vendors ply their trades. The services provided in the Main Hall include a weapons and armor shop operated by Marcos Cavielli, a magic shop operated by the wizard Hokas Tokas, and a bank run by Shylock McFenney. A pawnbroker named Sam Slicker also operates in or near the hall.

The Magic Kingdom notes that the Main Hall contains a large mural of a dragon, possibly a reference to the dragon artwork shown in the game's splash screen. Per Search for Mack, a flea market operates in or near the hall, owned by a man named Jacoby Jones. Peg's Place reveals that there's a meadow just east of the Main Hall. The Mountain Fortress and various other adventures mentions a bar, and The Waiting Room notes there's a little-used side door in the hall's kitchen which adventurers may use as a discreet exit. The Main Hall has a 50-inch TV purchased by the EAG (Deathstalker's Castle).

The most comprehensive description of the Main Hall to date is that given in Thomas Ferguson's A Runcible Cargo, which begins with the siege of the hall by the Guild of Bandits. Ferguson depicts the hall as a large room with bar and shop areas leading off it, and the burly Irishman's desk in one corner. To the east side is a large warehouse used by Sam Slicker to store the loot he buys from returning adventurers. There is also a cart containing weapons, suggesting that a lot more local business goes on in the Main Hall than just that seen in the game. It is also revealed that the adventurer resides in a small room just west of the hall rented from Hokas Tokas, the guild's resident wizard. The hall also contains a small branch of Eamon University.

The Main Hall has an "Adventurer's Lounge" (The Pixy Oak) and holds an annual "Adventurers Day" party (The Pathetic Hideout of Mr. R.). There's also a regular "Liars Contest" held at the hall where adventurers tell fantastic tales (Walled City of Darkness).

The Main Hall is commonly depicted as standing in a town or village, identified by some adventure authors as Evenhold or Eamon Town. A Runcible Cargo provides significant detail on the hall's surroundings, even locating the sites of several past Eamon adventures as occurring close to the hall, such as the Eamon sewers, Eamon railroad, and even the infamous House of Ill Repute. Ferguson also places the hall near the coast, which squares with several other adventures such as Sam Ruby's Elemental Apocalypse and John MacArthur's Journey Across the Muerte Sea which happen after an ocean voyage.

Main halls exist for organizations other than the Guild of Free Adventurers. SwordThrust starts players at the Main Hall of the Guild of Free Rogues, a building similar to its counterpart on Eamon described as having an examination room, a training room, a weapons shop run by a man named Heinrich, a bar where Hokas Tokas sits, and a fireplace where the banker Shylock Fitzhugh-Smythe stands.

A crude main hall stands on the Island of Apple, and a dark and sinister main hall exists in the evil alternate world of Zagora in Rhadshur Warrior. The Bandits Guild from A Runcible Cargo also have their own magnificently appointed Main Hall in the town of Frukendorf where the adventure's final showdown occurs.

Frank Black's short placeholder adventure The Waiting Room reveals the existence of an earlier Main Hall building used by the Free Adventurers Guild, now an abandoned structure located near the Haunted Apple Grove not far from the road to the Beginners Cave. Black describes the remains of the old Main Hall as "dark and imposing".