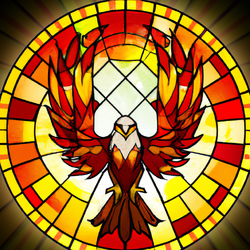 Alaxar symbolized as a hawk and sun

The worship of Alaxar is the state religion of the Kingdom of Evenhold, with a large temple dedicated to Alaxar in the city of Evenhold not far from the Main Hall. The temple's high priest is Pindar Rambis.

A species of tropical orchid, Alaxar's Kiss, is named for the god due to the fiery coloration of its flowers.