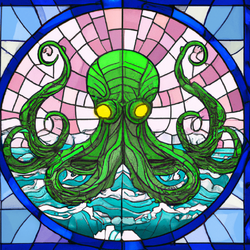 Weyren symbolized as an octopus

Weyren is one of the primary deities in the pantheon of Eamon described by Pat Hurst in the Eamon Gazetteer. Aligned to chaotic neutral, he is a major god of the plane of water and is the god of the seas and all of its creatures. Weyren is symbolized as "a sea giant or as an octopus whose tentacles penetrate all seas."

Weyren is worshipped primarily by mariners and fisherman, and as shown in Hurst's adventure Buccaneer! has a significant influence on maritime culture. The arched entrance to the harbor district of Evenhold is known as "Weyren's Gate", on which is inscribed the motto "Weyren is the sea, Weyren is the life." A large stone temple dedicated to him stands at the west end of the district near the intersection of Sea Lane and Captain's Walk, inside of which stands an enormous jade statue of Weyren in the form of an octopus, surrounded on the floor by a mosaic of a nautilus. Weyren's priests wear flowing green robes embroidered with an octopus sigil.

Distances at sea are expressed in terms of Weyren Strides.