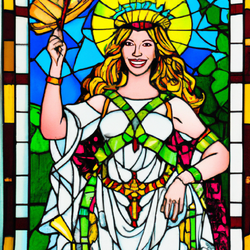 Annav, also identified as Etihw Annav, is the ancient goddess of love on Eamon, first mentioned in Henry Haskell's adventure Lotto's Masterpiece. A priceless bronze statuette of Annav, considered one of history's most beautiful works of art, was held in the collection of the ancient kings of Eamon on the island of Ervuol until its retrieval by the adventurer. Annav is also mentioned in Thomas Ferguson's adventure A Runcible Cargo.