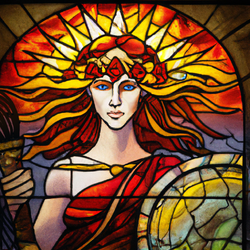 Depiction of Terza in stained glass

Terza is one of the deities in the Eamon pantheon and is described by Pat Hurst in the Eamon Gazetteer. She is the major goddess of the plane of fire and is the daughter of Alaxar, god of fire and the sun.

Terza is the goddess of purification through pain and sacrifice and is symbolized with a whip or a branding iron; her monikers include Mistress of the Iron, Chalice of Inner Strength, and Defender of the True Path. She is worshiped by some ascetic and monastic orders.

Her domain is an expanse of desert far southeast of Evenhold known as the Desert of Terza or the Desert of Endless Sorrows, within which is the ancient pyramid of Anharos.