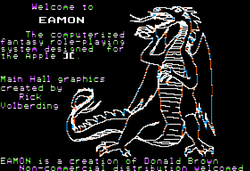 The Graphics Main Hall, also known as the Graphics Master or Eamon Master 5, is a master created by Rick Volberding for Eamon that adds a graphical interface and other new features to the Main Hall. NEUC president John Nelson announced its release in the August 1985 issue of the club newsletter.

In his August 1985 review, John Nelson praised Volberding's master as being "very well done and was lots fun to explore", and wrote that he intended to use it as his regular master. In an AdventureDisk ad sheet in late 1985, editor Jeff Bianco announced that AdventureDisk was publishing the Graphics Main Hall and wrote, "It is the best Master Disk ever and is a must for all Eamon Adventurers."