This gazetteer incorporates material from the following adventures:

Evenhold
a bustling, cosmopolitan city; a major port since it is the only natural harbor along the mountainous coast; a center for many religious, racial, and ethnic groups; a trading hub that offers a wide selection of commodities; the coinage is a holder in gold, silver and copper denominations
Grunewalde
a small duchy midst the Jarlschlager Range; pronounced as grune'-vall-deh; the coinage is the walder in gold, silver, and copper; the only town takes its name from that of the duchy; the duchy is the hereditary domain of the de Lupus family; a mining center that extracts precious metals and gems
Malphigian Sea
the sea to the west and south of Evenhold; the closer islands include Melosia, Cormorant Island, Burning Rock, Esparea Cay, Serpent Isle, and Leanda Atoll; an area of trading, smuggling, and piracy; hazards include reefs, sea monsters, and fierce storms
Desert of Terza
an expansive waste with little or no water for miles; thought to be the abode of Terza (see Pantheon); rumored to be the site of the pyramid of Anharos; crossing the desert without a good guide is not recommended; tribes of desert nomads called Rifs eke out a meager existence through trade, herding, and preying on others
Jarlschlager Range
the mountains that divide the western half of the continent from the spice lands of the east; they rise to extreme heights with only one known pass through to the east; the Great East Road connects east and west via this pass; surrounds the duchy of Grunewalde; rich in mineral ore and gem deposits, the most famous being the lost Gruner Mine
Cynwood
the forest east of Evenhold; popular for hunting; provides all types of forest products; bisected by the Great East Road; unsafe for travel alone; caravans often can be found to travel with along the road for greater safety; common site of secret religious rites 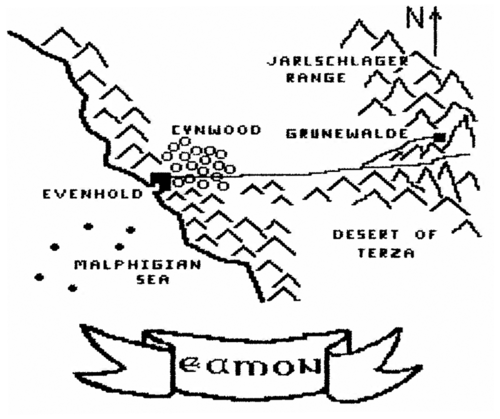 This map details the major areas of the adventures. Evenhold is the site of the Main Hall. There are 6 island groups in the Malphigian Sea in the vicinity of Evenhold. The Great East Road leaves Evenhold on its way to the spice lands of the East. A fork of this road leads to Grunewalde. A pass through the broken lands leads to the Desert of Terza. More of Eamon will be mapped as new adventures are added to the series.

Tanis IV
current ruler of Evenhold; lineal descendant of Anharos and defender of Alaxar (see Pantheon)
Pindar Rambis
high priest of Alaxar; very old – has held his position as long as anyone can remember; said to have mighty sorcerous powers
Anharos
ancient ruler of Evenhold who consolidated the kingdom against the forces of chaos and evil; the anointed one of Alaxar
Sar
a warrior of humble origin who led a popular rebellion against the excesses of Mlatan brotherhood (see Pantheon); hero of the realm
Lord Collingwood
commander of the navy of Evenhold; captor of Henri Le Marque; rigid and humorless
De Lupus
family name of the rulers of Grunewalde; reputed to be cruel and merciless; the family line is said to be cursed by the gods

Main Hall
favorite meeting place for adventurers for R & R
Phracian Fields
foremost burial gardens; on the Avenue of the Temples near the east end of town
Ramsgate
large rock formations on either side of the harbor entrance
Weyren's Gate
gate that separates the harbor district from the rest of Evenhold; on Sea Lane
Temple of Alaxar
houses state religion; largest temple in Evenhold; located on the south side of the main plaza; site of golden altar of Alaxar

A compendium of deities, demigods, and demons that inhabit the outer planes.

Diamond of Purity
powerful talisman given to Anharos by Alaxar to aid in his battle against the forces of chaos and evil; a flawless diamond that radiates a magical aura deadly to the unpurified; entombed with Anharos so that it would continue to aid him in the afterlife; said to be Alaxar's tear
Shroud of Phrax
powerful talisman; the symbol of Phrax's domain; a white linen burial shroud with a black willow tree woven into the cloth; wellspring of Phrax's power; kept on the plane of earth
Well of the Souls
a bottomless well on the plane of earth; filled with the concentrated anguish and torment of the human soul; will never run dry because the human soul will never be perfected
Pillar of Terza
an obelisk in the heart of the Desert of Terza; a place for direct communication with Terza through prayers and offerings
Pyramid of Anharos
the burial tomb of Anharos in the Desert of Terza; from here Anharos is said to still combat evil; sacred shrine to the people of Evenhold who revere Anharos above all other men
Sword of Virtue
a mystical weapon with supernatural powers; its thrust is anathema to corrupt, degenerate, and evil beings
Talisman of Brynne
a magic medallion that confers great wisdom on the wearer; enchanted by the breath of Brynne; gold embossed with a picture of Brynne laying hands on the heads of kneeling kings and potentates
Hand of Phrax
a potent talisman which signifies that the recipient is the favored one of Phrax; a golden hand with an ebony finger
Fortiter
enchanted axe fashioned by the mage, Molgrest; charged with the power of lightning when used at sea due to imperfection in spell of enchantment
Seeker
enchanted sword fashioned by the dark dwarf, Fulstan; it is sentient and drinks the blood of its victims