From Eamon Wiki
Jump to navigation Jump to search
This user is the subject of his own article: Huw Williams 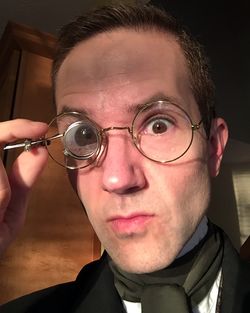 "This calls for careful examination..."

Hi, I'm Huw Williams, the main administrator of the Eamon Wiki and a longtime Eamon enthusiast.

If you have any questions, problems, suggestions, or just feel like chatting about Apple II stuff, I'd love to hear from you!

My first exposure to Eamon was in the early 1980s when I was 10 or 11 years old and came through my older brother who had an Apple II. He'd purchased the Master Disk and a few adventures at a software store in Terre Haute, Indiana (if I recall correctly), and I started playing them on the Apple in my parents' farmhouse in Warren County probably around 1983 or 1984.

I really enjoyed using the Eamon Dungeon Designer and put together a couple of custom adventures, neither of which was ever entirely completed or particularly well-crafted. One was called The Test Run (aka The Secret Search) and was a simple romp through a long underground complex of corridors and chambers without any particular puzzle or quest elements. Examining its FRESH MEAT file, I see the last adventurer I sent through it was named D'Irraj, a reference to a wonderfully obscure extended-universe Star Trek character. The other was The Meaning of Life (which I attributed to "Prostetnic Vogon Jeltz"), an homage to The Hitchhikers Guide to the Galaxy by Douglas Adams which I must have been reading at the time. The last adventurer I sent through it was named Gothmog, a ridiculously overpowered player named for (and based on) a Balrog demon from J. R. R. Tolkien's The Silmarillion. Good old Gothmog. Not great at making friends, but between his "flaming sword" and his "whip of fire" not much slowed him down. (I also occasionally adventured with a character named Zharn, named for a Klingon in the Star Trek novel The Final Reflection.)