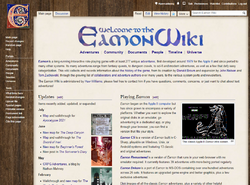 Eamon Wiki (originally The Wonderful Wiki of Eamon) is a user-editable online encyclopedia of information related to the Eamon text adventure series, founded and administered by Huw Williams. It's powered by MediaWiki version 1.35.0, a free software application by the Wikimedia Foundation, and is hosted by DigitalOcean.

Eamon Wiki began development in March 2012 under the name "The Wonderful Wiki of Eamon" and opened to public editing on 17 March 2013 at eamononline.com. The wiki operated from a private Linux web server at Williams's residence in West Lafayette, Indiana, and shared space with several other sites. (Williams kept a Get Lamp commemorative coin inside the server's case.) Much of the encyclopedia's structure was built during the first two to three years of operation, including most of the category tree and article stubs.

Beginning around 2015 the wiki was the target of increasingly frequent automated cyber attacks that sought to create large volumes of bogus users and articles; in response, Williams disabled new user account creation and editing in order to prevent further vandalism to the project, and the wiki became dormant.

Anyone wishing to edit the wiki may request an account, though for security all new account requests must be manually approved.