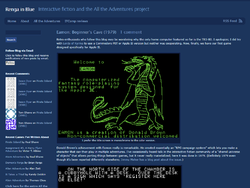 Renga in Blue is a blog written by interactive fiction enthusiast Jason Dyer describing his experiences playing a wide variety of classic computer-based adventure games. Dyer launched the blog in February 2005 and in September 2016 wrote about his experiences with the first two Eamon adventures, The Beginners Cave and The Lair of the Minotaur. Dyer stated in 2020 that he's likely to review more Eamon adventures since "they're early enough to be important and I've had enough people express interest."