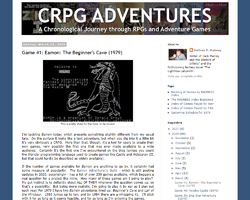 The intro to the blog's review of Eamon.

CRPG Adventures is a blog dedicated to computer role-playing games by writer and gaming enthusiast Nathan P. Mahney, billed as "a chronological journey through RPGs and adventure games." Launched in March 2014, the blog documents Mahney's progression through a long list of games in order of their release, starting with The Dungeon (1975) and gradually working forward. Mahney reached the Eamon adventure The Beginners Cave (the 42nd game on his list) in March 2020, and reviewed The Lair of the Minotaur (52nd) in March 2021.

Mahney rates games based on their strength in seven categories — story & setting, characters & monsters, aesthetics, combat, mechanics, challenge, and fun — and awards up to seven point for each; the point total is then doubled to produce what Mahney calls the "Radness Index". For The Beginners Cave, he gave low to medium marks in most categories: he disliked the adventure's vague mission, simplistic combat, and overall lack of challenge ("trivially easy"), but found the mechanics solid and the game's descriptions better written than most others of its time. He awarded bonus points for the game's historical significance and its potential for better adventures in the future, giving the game a Radness Index of 26, similar to Moria and Akalabeth. "I really like what it's trying to do," he writes, "it just doesn't quite get there with its first scenario."