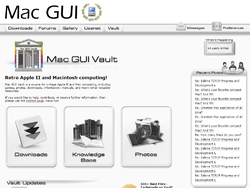 Mac GUI Vault is an online repository of vintage Apple II and Mac computing resources, including games, photos, downloads, manuals, and other information. It's part of the larger Mac GUI project, a site dedicated to customizing Mac interfaces with related files and user forums. The site, which began in early 2004, was operated by Dogcow who announced its closure in a December 2015 post.

Included in the site's collection are a great many files from the GEnie and Delphi Apple II archives, including the GEnieLamp A2 and A2Pro newsletters and many files from Eamon and other early computer games.