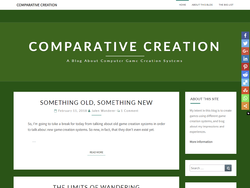 Comparative Creation is a blog about computer game authoring systems written by Jalen Wanderer and first published 4 October 2013. Jalen focuses on "programs and utilities that are specifically designed to allow the user to create computer games" and has written several articles describing his experiences with Eamon as a first-time user.

Matthew Clark announced the blog in a December 2013 post, describing it as an interesting read and a good way for experienced Eamon players to see what it's like to discover the game for the first time. Jalen notes in the comments that he plans at some point to write a new Eamon adventure.