The Scrivener's Diary is a blog by Huw Williams (User:Huwmanbeing). Registered users may post comments to the talk page.

The Remapped Island of Apple

Admittedly, Donald Brown's The Lost Island of Apple is not the most complete or polished Eamon adventure. The enemies are few and repetitive, the setting is sparse, and the plot thin and undeveloped. 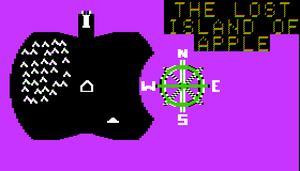 Brown's original map of the island.

And yet... I've always had a special fondness for The Lost Island of Apple ever since I first played it as a child some 35 years ago because it featured something remarkable and entirely unique in the context of Eamon: the ability to walk freely across a graphical map! I was quite taken by it when I first played it on my brother's Apple II, and I remember imagining what it might be like if I could peek past the pixelated veil of the computer screen and behold all the hidden details of this strange, dark island floating in a magenta sea.

That thought returned to me again a few weeks ago as I was learning to use a new art application on my tablet and wondering what a good project might be for me to cut my teeth on. Apple Island! I could have some fun expanding on Brown's map and perhaps finally reveal a bit of the complexity that I imagined was hiding behind the blocky '80s pixels of the original. I took up my pencil and set to work.

For those who want the blow-by-blow of the project that ensued, or who enjoy ramblings on speculative cartography, please read on; others feel free to skip to the end to see the final product.

The first thing I needed to figure out was the approximate size of the island. Though Brown didn't put a scale bar on his map, he did leave a clue in the introduction when he noted that "every movement you take lasts a third of a day;" I therefore dispatched to the island the ever-dependable Sam (pride of the Guild, hero of Evenhold) and counted the number of moves it took him to traverse it. The result was 28 moves (or 9⅓ days) to cross east-to-west, and 27 moves (9 days) north-to-south.

To convert these travel times to distances, I began by checking a variety of fitness and hiking websites, most of which agreed that a healthy, experienced hiker, stopping for breaks and meals, walking good trails in decent weather, and using relatively lightweight equipment might reasonably walk 20 miles in a day. Applied directly to Sam's travel times, this pace might suggest that the island is close to 200 miles wide, but there are quite a few factors that almost certainly cut his daily mileage: 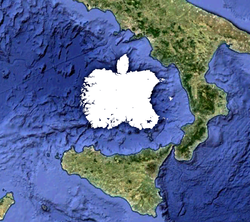 The island to scale with southern Italy.

These factors introduce a considerable amount of variability and uncertainty, and no doubt cut the linear distance that even a fit individual like Sam might expect to cover in a day, possibly by quite a lot. Bearing all of this in mind, I settled on an average pace of about 10 miles a day, or 3⅓ miles per move — a respectable speed I think, given the rugged terrain and frequent distractions. Using this figure, I concluded that the island has a diameter of about 90 miles, and an area of perhaps 6,000 square miles, falling in size somewhere between the islands of Jamaica and Sardinia. Plenty of room for mountains, plains, castles, bears, dragons, and a bevy of panhandling hermits.

Equipped with a sense of the island's scale, I next needed to work out the shape of the landscape. The only significant topographical feature Brown described was a set of mountains in the west/northwest, so I started with the basic idea of a sharply uplifted western range gradually subsiding into foothills and more open plains to the east and south. I fancied the western coast to be a lot like Norway's, jagged and pierced by innumerable fjords and rocky inlets, loomed over by sharp, snow-covered peaks. While drawing the coastline I was reminded of Slartibartfast from The Hitchhiker's Guide who rhapsodized about Norway's "lovely crinkley edges" and how fjords give a continent "a lovely baroque feel."

Another significant feature of Brown's island is the wide semi-circular bay to the east, which given its smoothly-arced boundary I interpreted as the edge of an ancient impact crater, and which I whimsically named The Bight. In keeping with the structure of most complex craters I added low hills around the rim and an island in the middle of the bay formed from the uplifted central peak (obscured in Brown's original by the compass rose). The plains outside the crater betray signs of fracturing, including narrow canyons and cenotes, and due to the crater's raised rim drain north or south to the sea.

The smaller southern bay I rimmed with wet lowlands, and the northern peninsula (a sharp rectangle in Brown's original) I softened into a more leaf-like shape, closer to that of the Apple logo which the island's coast is patterned after. 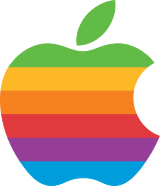 The colorful classic logo... or a biome map?

When it came to laying out the island's biomes, I was on my own: neither the original map nor the in-game descriptions gave any clue to the kinds of environments I was making my long-suffering Sam hike through. Grassy, wind-swept steppes? Rank, steamy jungles? I wanted to ground my choices in something relevant, so I turned to the original Apple logo that had inspired Brown. Its rainbow stripes reminded me of the growing zone maps printed in the old Burpee Seed catalogs my mother used to browse, or the brightly colored bands of a Köppen climate map. Knowing that a 90-mile-wide island probably wouldn't have a terribly diverse range of climates, I applied the colors loosely, filling the northern portions of the island with forests to represent the logo's green top stripe, riddling the southern lowlands with lakes and streams after the logo's blue bottom stripe, and throwing in some golden steppes and ruddy canyon lands in the interior to represent the warm intervening colors.

With the setting established, it was time to bring a little life and flavor to the island by adding settlements, roads, buildings, labels, and other signs of civilization. Brown identified only five specific sites on his original map so I started with those:

These few sites left many miles of empty, boring space on the map and seemed insufficient for even a sparsely populated island, so here I felt it necessary to create a number of my own embellishments out of whole cloth — or very nearly so. Experienced Eamonauts will know that Brown kept his tongue pretty firmly in his cheek with most of his adventures, never shy to slip in a quirky, anachronistic reference or drop a groan-inducing pun (remember the Wand'ring Minstrel Eye from The Lair of the Minotaur?), so in the interests of retaining at least a little of his humorous sensibility I threw in a few references that Apple aficionados might spot.

The five detailed insets were fun to make, though they took almost as long as the rest of the map. The water hole was a particular challenge since branches of the tunnel extend in every direction — difficult to show without resorting to stacked slices! For the detail of Coopertown I turned to the Medieval Fantasy City Generator by Watabou, a great utility that can quickly generate the geometry of a random village within some customized constraints.

Finally I surrounded the map with a twisted rope pattern, and within the tiny gap inside each twist hid the outline of Brown's original island.

Below is the final product: 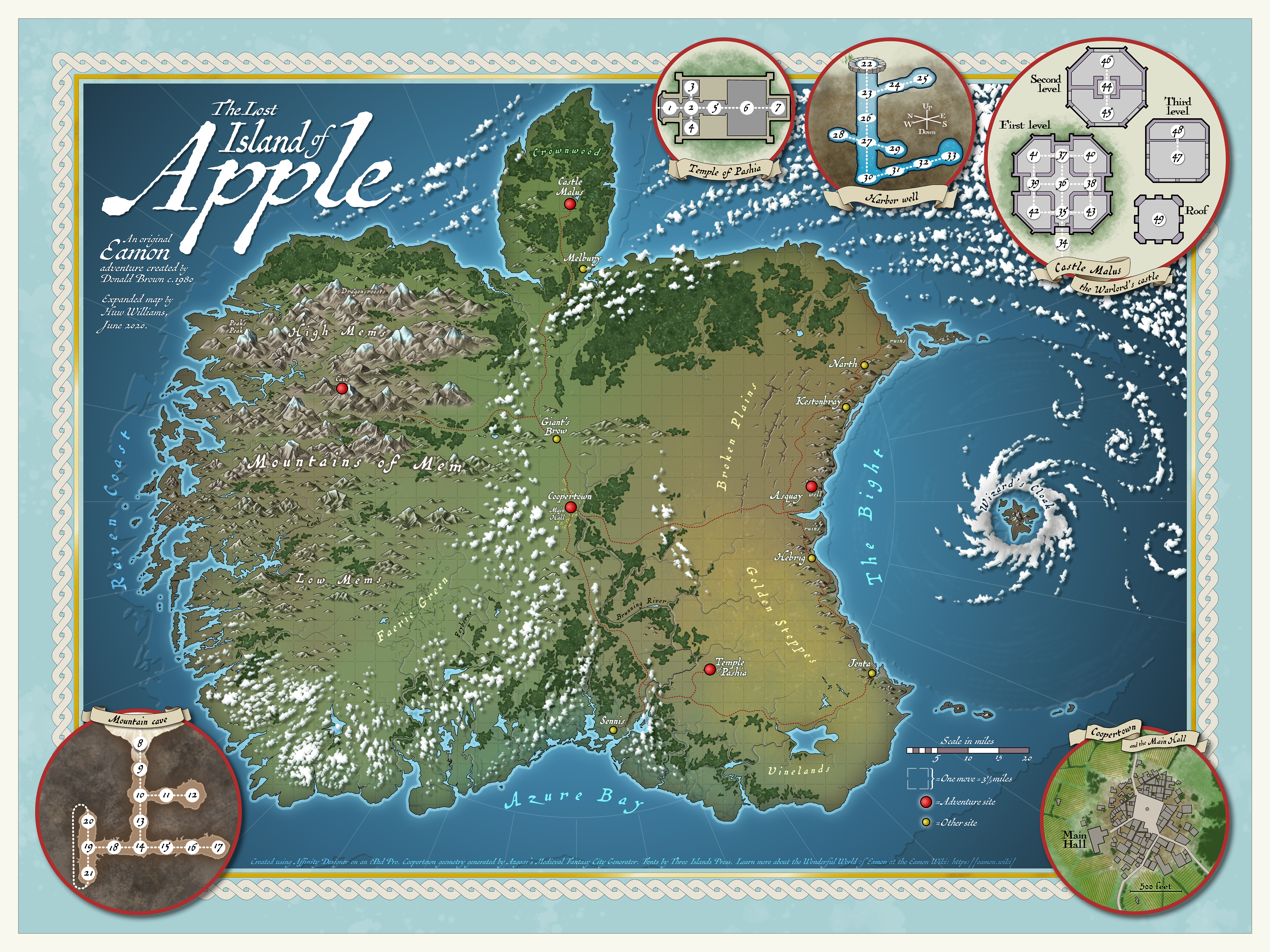 If I ever have the inspiration, energy, and time to craft an Eamon adventure of my own, I could easily imagine setting it on the Island of Apple; I'd also be delighted to see others use the setting. The land includes lots of hooks for possible stories, plus plenty of open space for new and exciting features yet unguessed.

Map-wise, my intention is to take what I've learned from this project and apply it over the coming months to some original maps for other Eamon adventures (a new Zyphur River map is in the works), or possibly to new versions of the charts in Hurst's Gazetteer.

Like my imagined explorer Aldus Poak, I'm eager to chart the many wild, magical lands of Eamon!

Voilà — a new blog is born!

I thought it would be fun to post some thoughts and commentary now and then regarding my Eamon-related endeavors, so I'm diving right in. Mediawiki isn't the perfect blogging platform since it lacks many of the niceties that dedicated blog sites provide, but hey, it meets my simple needs, and it feels rather nice to keep it in with all the other wiki content, so for now, here it lives. I do plan to add some extensions, build a few templates, and make some display tweaks to improve the experience, and at some point may cross-post elsewhere.

I hope you enjoy it, and please drop me a message if you have any comments or suggestions. Thanks!