Eamon was ported by fans to other platforms, including several different versions for MS-DOS. If you want to give the game a try, there's also a handy browser version.

You walk into the Adventurer's Guild, register your name and abilities, then buy a weapon and a piece of armour. After asking the nearby wizard to teach you some spells, you enter a hall lined with doors – each leading to a different adventure, in a different setting, written by a different person. Welcome to Eamon.

Eamon isn't just one game, it is a game system – a set of rules and tools for creating more games. Initially circulating by word of mouth, it became popular via Recreational Computing, an American computer magazine. Their July 1980 issue was entirely dedicated to “fantasy games”, with articles about how to create such games, their future as a genre and also a few games, such as Eamon and Wizard's Castle, with their authors explaining how they work and the next few pages containing the game's entire BASIC code. 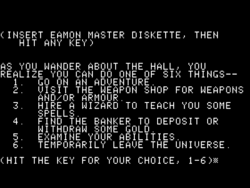 The Main Hall, where your characters are created and come to rest between adventures. The shops offer only a few items, so you'll need to go out exploring to find the cool stuff.

Readers would type the code on their computers and then save it on a tape or disk in order to play. This was cheap way to distribute games before the Internet, but also an invaluable resource in helping aspiring programmers learn from other's code.

Created by Donald Brown, Eamon's heart is its "Main Hall" program, used to create your character and load adventures. You simply type a name and the game will generate a character based on three stats: Hardiness, which determines HP and carries weight; Agility, used in combat and when activating traps; and Charisma, which controls how friendly NPCs are (mostly if they'll attack you or not) and store prices.

You can buy weapons and armour at the store, as well as spells from the wizard. There are five weapons types, three armour categories and four spells – Heal, Blast, Speed and Power – which heal, deal damage, boost agility or ask the gods for a favour, respectively.

The Main Hall also includes a sample adventure called Beginner's Cave, and it's a good taste of what Eamon is. It plays much like text adventures such as Colossal Cave (1976): the game gives a description of the room you're currently in and you act by typing commands, such as NORTH (or N) to head north, GET SWORD to grab a sword on the ground, etc. Eamon's novelty was introducing RPG elements, with combat being based on dice-rolls and your stats and weapon skills slowly increasing as you use them.

Furthermore, as soon as you finish the adventure you're returned to the Main Hall (given you survive) and can use your new weapons and skills in hundreds of brand-new adventures, all created by other players using Eamon's Dungeon Designer Diskette.

"Unlike most games, there is no clear single goal in a fantasy roleplaying game. Instead, you are directing the actions of a character to achieve the goals you want him/her to achieve. Although most people accept normal goals such as 'make lots of money' or 'become a feared warrior', you can choose any yardstick you want to measure your success. After all, it's your life – you ARE the character."

This means you can take the magical sword at the end of the Beginner's Cave into a space adventure, use it to stop an alien invasion and then bring your newly acquired blaster rifle to Ancient Greece to battle the Minotaur – or any other adventure whose disk you managed to get at college or at work, trade by mail or create yourself. Remember, this was long before the Internet or even BBSs became popular! 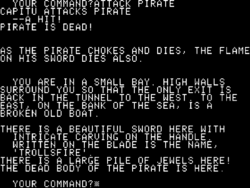 I kill the last enemy of the Beginner's Cave and he drops his magical sword, which I'll carry to new adventures. It has the special power to produce fire, which can be used to solve puzzles in this adventure.

Seeing the game's success, Donald Brown created SwordThrust (1981), a sequel to Eamon, but this time a commercial product. Despite several improvements, such as a better interface and more spells, it was never as popular and had few adventures made for it, resulting in Brown abandoning game development. The free, public domain nature of Eamon had made it spread across the US and, with Brown leaving Eamon behind, the community rose to the challenge of keeping the game alive. Programmer John Nelson hacked the system to allow for more complex designs and in 1984 founded the National Eamon Users Club, an association that catalogued Eamon adventures and published a newsletter with reviews and design tips.

In 1988 the club became The Eamon Adventurer's Guild, helmed by Thomas Zuchowski, and can still be found at www.eamonag.org. Their records contain 256 adventures, most created between 1984 and 1994, but sadly it stopped being updated in 2005.

Today it's easy to download these adventures and enjoy how diverse they are. You might be a pirate, a cop or a time-traveller, delve into Moria, hunt hackers, fight cyborgs, explore the inside of the Death Star, or even play as Batman pursuing the Joker.

The Eamon Adventurer's Guild produced a CD which comes with 242 public domain adventures, maps, guides, all their newsletters and some emulators. You can download it here.

Of course, the problem with having a game entirely based on user-generated content is that the quality varies wildly. Some games are creative and well-designed, while others suffer from poor writing, cheap deaths, obtuse puzzles and tiresome combat. The Star Wars adventure listed above sounds cool, but it's filled with endless battles against stormtroopers.

Yet, I finished it. Mostly because I really wanted to bring a lightsaber with me. Mind you, the lightsaber functions like any other sword, and it was actually weaker than the weapons I had. The only thing special about it was its name. But this incredible power that words have to feed our imagination is precisely why Eamon conquered so many fans.