An emulator is a piece of software that imitates the behavior of one computer system on another, often for the purpose of allowing the user to run programs written for obsolete or unavailable platforms. The original Apple II Eamon adventures require the use of an emulator in order to run on modern machines.

Many emulators are available for different combinations of host machine and guest machine; the list below in incomplete but gives some suggestions and recommendations. 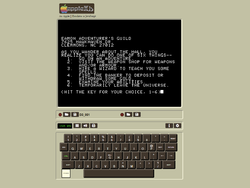