Dungeons & Dragons is a fantasy role-playing game created by Gary Gygax and Dave Arneson and first published in 1974 by Tactical Studies Rules (TSR). The game served as one of the inspirations for Donald Brown's Eamon and SwordThrust series, Brown having been introduced to it in the late 1970s by his friend Bill Fesselmeyer.

Many plot points found in Eamon adventures—sometimes the entire adventure—have been straightforward adaptations of Dungeons and Dragons adventure scenarios. The material of The Creature of Rhyl by Robert Parker is taken from adventure modules, the essential features having been published in Dragon magazine. The adventure was "buried" by Tom Zuchowski during his tenure at the Eamon Adventurer's Guild due to fears of TSR's litigious reputation. 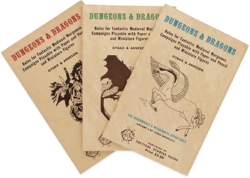 Covers of the original 1974 rules booklets

The relationship between Dungeons and Dragons and Eamon has also at times given rise to tongue-in-cheek rivalry. Nathan Segerlind's adventures The Bridge of Catzad-Dum and The Lair of Mr. Ed both feature encounters with "D&D Fanatics"; one such fanatic is described in the former case as "[t]he strangest person [the player] has ever seen in [the player's] life" with a "dazed look in his eyes" and the latter encounter being described as a vicious, "seething horde" led by Gary Gygax (creator of Dungeons and Dragons) himself.