Middle-earth is a continent in the fictional world of Arda where the events in J.R.R. Tolkien's The Hobbit and The Lord of the Rings take place, and is the setting of a number of Eamon adventures based on Tolkien's stories. 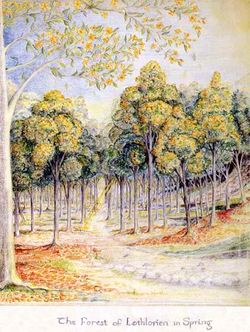 The Forest of Lothlorien in Spring by J.R.R. Tolkien (1940s)

Sam Ruby released eight Middle-earth adventures in the span of about 18 months; the first three to be published were adaptations of settings described in The Lord of the Rings or The Hobbit, and are collectively known as the Lord of the Rings series:

His next draws from the First Age story of Beren and Luthien in Tolkien's The Silmarillion:

The final four return to Third Age and are collectively known as the War of the Ring series:

Ruby's The Valley of Death also probably takes place in Middle-earth since it's set on and around the River Anduin.

EAG president Tom Zuchowski wrote two adventures set in the world of Arda, both featuring the characters Gorim the Dwarf and Galehir the Elf as they aid the adventurer in penetrating dangerous ex-Dwarven strongholds. The adventures are among the most highly rated Eamon stories.

Nathan Segerlind's 1988 adventure The Bridge of Catzad-Dum sees the warrior Samurai Cat venturing into a strange, parody version of Moria.