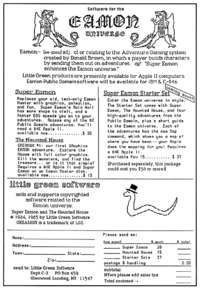 A Super Eamon ad giving the pronunciation as [ee-men].

Since Eamon is a textual game without spoken audio, players' pronunciation of its name vary and there's no truly definitive answer to how it should be pronounced. Creator Donald Brown chose the name around 1979 when he was first developing the game system, reportedly basing it on a name he picked at random from a nearby dictionary. The name Eamon, also commonly spelled Éamon or Eamonn, is a traditional Irish male name normally pronounced "AY-men" (rhyming with "layman"), but Brown stated that he wasn't familiar with the Irish pronunciation.

Below are some sources relating to the title's pronunciation: