Wall Street is a commercial computer game written by Eamon creator Donald Brown and published in 1981 by CE Software. CE advertised the game in the manual for SwordThrust, describing it as "a fast-paced financial strategy game"; it sold for $24.95.

The game pits from one to nine human players against each other and against the computer-controlled stock market, with the goal of "wreaking havoc" on the market and becoming rich. Per the advertisement, "Wall Street combines the best aspects of stock trading to make an exciting game of skill and luck." 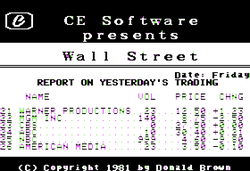 Reviewer Bob Proctor, writing for Computer Gaming World in 1982, felt that Brown's game wasn't a realistic representation of the stock market, but that the player interaction was enjoyable and that it was "the most interesting stock market game yet."