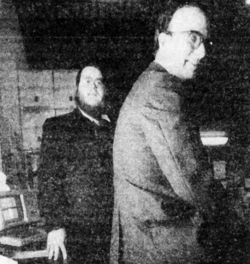 Don Brown, left, and John Kirke of CE Software, a West Des Moines company that writes software for Apple computers, say a colorful new ad campaign has resulted in a flood of orders for its newest product.

QuicKeys, an innovative, easy-to-use computer program that allows a computer user to chain together several commands to a more efficient, single keystroke, is a program for Macintosh computers. It was introduced to the computer market in September.

The company is spending $50,000 a month on a full-color, two-page ad in five national computer magazines, even though the company has been bringing in an average $40,000 a month in sales. But they think it will be worth the cost because they expect sales of QuicKeys to skyrocket.

"Based on the preliminary feedback and initial sales, I'd say the QuicKeys sales will make sales of our other products inconsequential," said Don Brown, a vice president of the firm and the man who wrote the program.

In January, the firm began using half- or quarter-page black and white ads in national computer publications. Sales increased somewhat, but not markedly, said John Kirke, the other vice president of the firm. In the spring, Lessing-Flynn, the company's advertising agency, designed the ad in a four-color, two-page format, and bought ads in September issues of the magazines.

The results were astounding, Kirke said. Sales for 1986 ending in September were $100,000, Kirke said. For this year, sales were $350,000, and most of the three-fold increase came in the last month of the firm's fiscal year after the ad had run, Kirke said. The company predicts sales will surge well past $1 million in the next year, thanks to QuicKeys and the ad campaign that's selling the program.

Already, the company has hired eight people in the last two months to handle the increase in orders, brining total employment to 14.

"They've been pulling just about anyone they can find to help out," said Joe Rosenberg, executive vice president of Lessing-Flynn and account executive for CE Software. "With the huge orders lately, they've even had to have their programmers running the shrink-wrap machine" for packaging the computer programs for shipment.

The company was founded in 1978 when Brown graduated from Drake University with a bachelor's degree in actuarial science. He'd written many Apple programs while in college, and said he had "built enough of a reputation" that he felt assured of getting a job with Apple Computers in California. Now, Brown is considered tops in his field. The readers and editors of Macintosh Buyer's Guide, published by Redgate Communications Corp., in January named Brown one of the top 18 writers of Macintosh programs in the world.

But Kirke and Dick Skeie, now president of CE, who owned Computer Emporium, cajoled Brown into forming a company with them and writing programs for the new company instead. Brown had been a stready customer of Computer Emporium, and the three became friends. Kirke and Skeie handled the money and marketing matters for the company, and Brown writes and oversees four assistants writing computer programs.

"We thought we would have made a lot more money doing this. But it's just now taking off," Brown said.

Up until now, Brown has been writing programs that fill empty niches, he said. He has written programs called "Mac Billboard," "Mock-Write," "Sidekick," "DiskTop," and "CalendarMaker."

The QuicKeys program has given him the confidence and the company the needed capital to tackle competing head-on with big name competition, such as Microsoft and Lotus. Brown wants to write better, easier, more efficient versions of existing programs and will try to outsell the competition.

The company is marketing its wares in a new way as well. About 80 percent to 90 percent of the company's sales were "shareware" in the past. Shareware means the company sends out computer software to potential customers, and if the customers like the program they send CE Software $15 to $20, depending on the program. If not, they return the disk to the company. Or, if they think their friends would like the program, they pass it on. The concept is based on trust.

Now, the company is moving away from shareway in an effort to make more money, Kirke said. The new programs range from $30 to $100, and customers must order them from CE Software by phone or mail, of buy them from computer stores. The company sells its products directly to stores, but mostly is large orders to distributors.