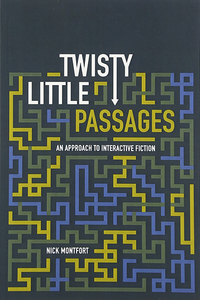 Twisty Little Passages: An Approach to Interactive Fiction is a book by Nick Montfort first published in February 2005 by the MIT Press. Montfort, himself an interactive fiction author, examines the origins and history of IF from precursors like Dungeons & Dragons through early computer titles like Colossal Cave Adventure and Zork, and finally to more recent IF work and the development of online writing communities. He also studies how interactive fiction has influenced other forms of literature and entertainment.

In Chapter 7, "The Independents", Montfort includes a section titled "Tool Your Own Adventure" where he touches briefly on Eamon:

Some special-purpose interactive fiction development systems were used by the ordinary home computer owner of the 1980s. An important early one was Donald Brown's 1980 freeware system Eamon, a system for creating text-based role-playing games; these are primitive interactive fictions that only accept one- or two-word input from a limited set of commands, all of which could be listed. Eamon was used to create more than 240 games; these ranged from works based (without authorization) on The Empire Strikes Back to educational games to a satirical samurai adventure rife with Eamon in-jokes.